The world’s most dynamic audio game

When the lights go out,
demons are awaken

Experience an unprecedented immersion in the game lore and get to see the power of your imagination. But beware of the unseen, as it is the most frightening…

Rosemary’s Fate: Life worth living is a dynamic audio dark adventure game. Dark echoes of the WW2 tragedies reached the present, and you will impersonate three different characters, embroiled in the history. Within the gameplay, you will find yourself in three time periods, connected by a gruesome mystery and a life or death mission. Try to survive the horrors of war, defeat dark incarnations of anguish and evil, and above all – prove that every life is worth living.

Rosemary’s Fate is the most dynamic audio game in the world, which means that its whole, rich lore was created only with sound, even though the gameplay dynamic is rather similar to video games. Despite the lack of visuals, your challenges aren’t limited to making storyline decisions, and there’s no narrator to guide you through it. Prepare to be fully immersed in the terrifying interiors of a former monastery steeped in impenetrable darkness, where you will have to learn how to move, navigate, and even fight or dodge your enemies.
Thanks to our original approach to auditive scene design and the binaural technology, you will find yourself in the sound space of the game quite intuitively: you’ll be able to recognize objects and NPCs, how far the enemy is, what ground you walk on and in what room you are. The findings will allow you to save the life worth living.

The game allows either manual control, available for PC, smartphone, consoles, tablets, and VR, or voice control, compatible i. a. with Alexa Amazon.

Under the facade of a happy woman, there are unexplainable anxieties and longings. There is one remnant of unknown past from before she had been adopted, a totem of identity. Black and white picture of a group of people who seem… fearful? They stand in front of a monumental, red brick building. What are they afraid of? Who are they? And where?

Thomas knows he must aid his beloved in the search for her roots. With the help of his friends from a history forum, he finds a lead! The building is the former Owińska mental hospital in Poland, from just before WW II began. And one of the ladies in the picture is… Her great-grandmother? 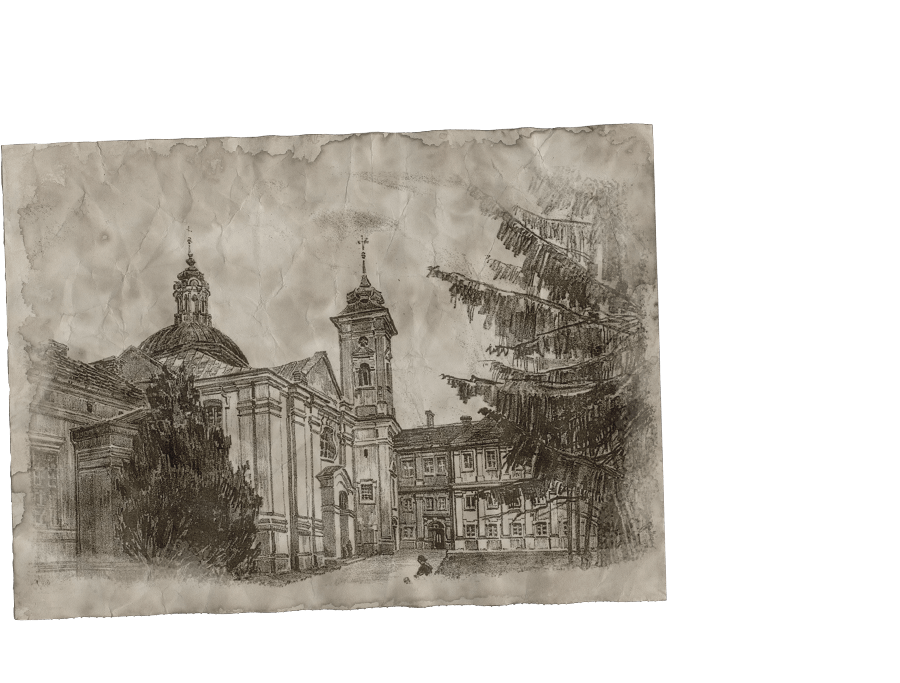 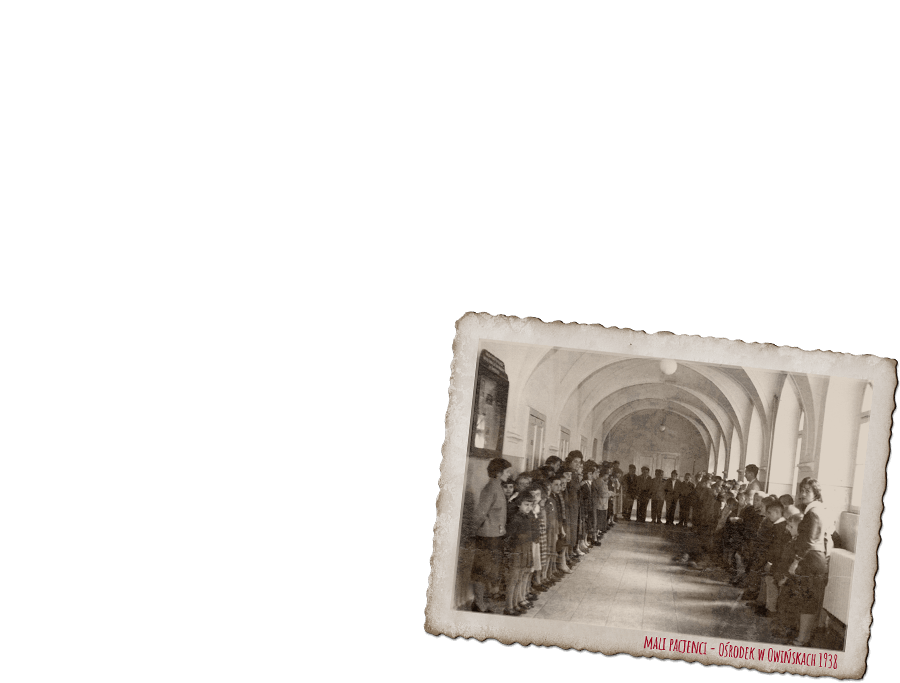 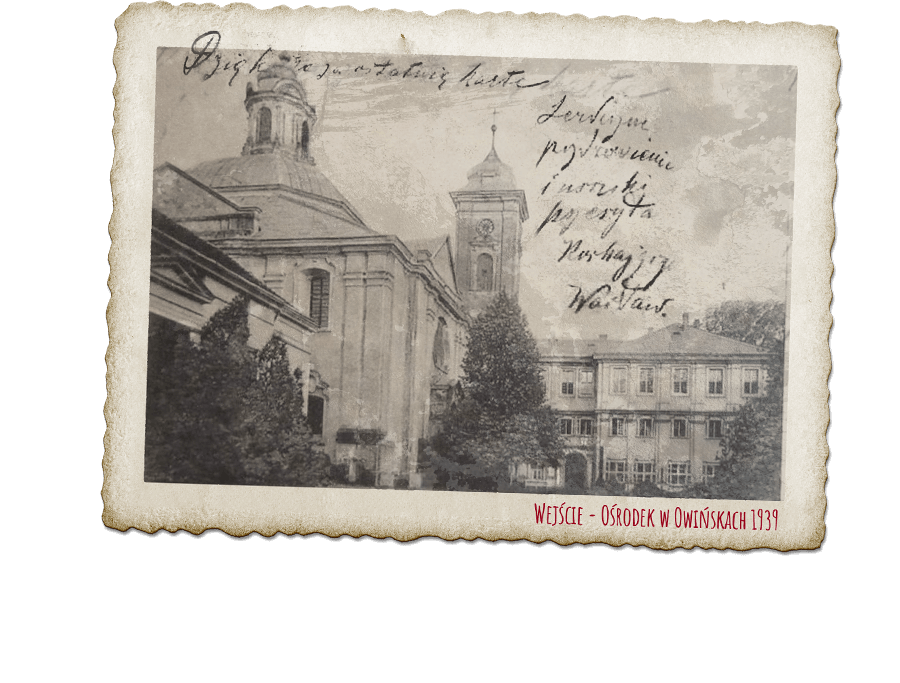 So, Thomas and Mary come to Poland, only to find another photography in an old Cistercian convent library. It’s exactly the same as Mary’s… Or is it? No, hold on, it isn’t. There’s this one little girl next to great-grandma. But before they have time to think, find any meaningful answers, there comes… Oh, we can’t explain this, you have to hear it yourself! Because this is where everything gets complicated.

Thomas has lost the sense of sight and tries to find himself in these new circumstances. He wanders about in a labyrinth of corridors, sometimes thinking he still is in the present, and only hearing strange revenants. Sometimes realizing he’s now in a completely different place and maybe even time. He hears screams in German, gun shots, crying… Now – or once upon a time – he will meet an extremely important little girl. Oh, and also there’s Blinky, a cat that seems simultaneously dead and alive – what a paradox…

The historic background of events that take place in the game is Aktion T4 – a program of mass murders of mentally ill and disabled people, carried out by the III Reich under the banner of „Eliminating life unworthy of living”. The grim agenda of racial hygiene and negative eugenics has wiped away hundreds of thousands of people, and among them, a 1000 victims from the former Owińska Mental Hospital, that existed in a 13th century Cistercian nunnery building. The beautiful historic irony is that today this is where a Special Education Centre for Blind Children operates, proving that every life is worth living. 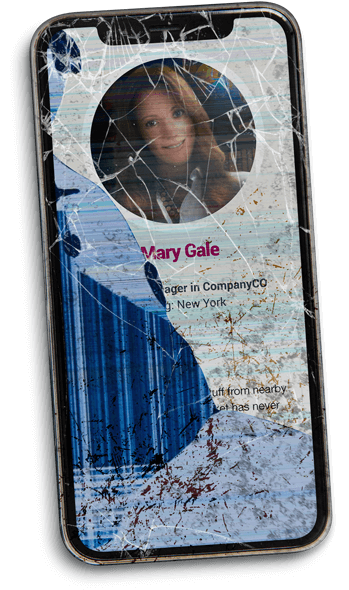 A successful, self-made woman. Mary was found as an infant at the dock port.

Mary loves her step parents but inside she feels an inexplicable longing for the real ones.

She needs to find the truth about her origins. 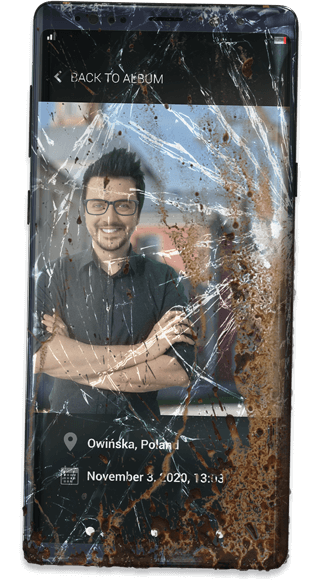 Thomas is for Mary someone more than just a close friend, but he is not sure whether it is love.

He feels Mary's hidden anxiety and tries to find out her real roots.

He works as a historian of ancient civilizations in college. He's also a good amateur boxer, researcher in astronomy club and the owner of a collection of white weapons. 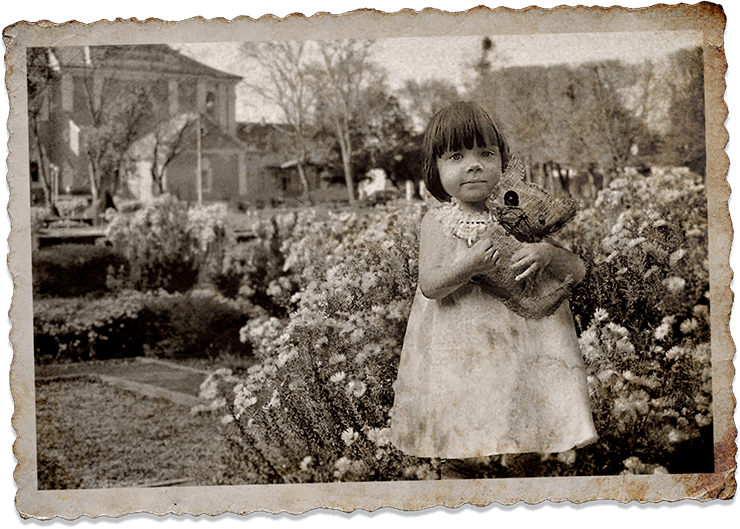 In 1939 for everyone she's just a cute and shiny Sarah's daughter.

But not for SS Obersturmführer Lazarus. He came for her to Owińska immediately after the invasion of Poland.

Rose is the key Entanglement in Rosemary’s fate... 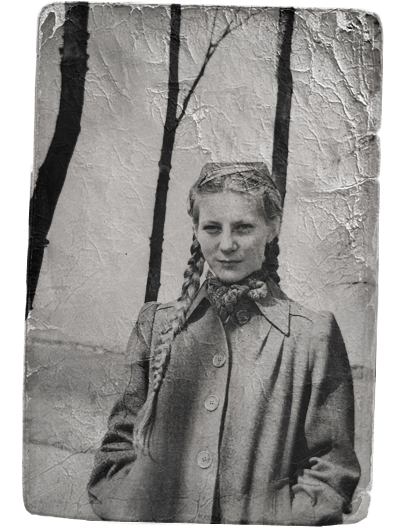 A brave woman who found herself in the midst of tragic events from WWII,

imprisoned in dark corridors of space and time. 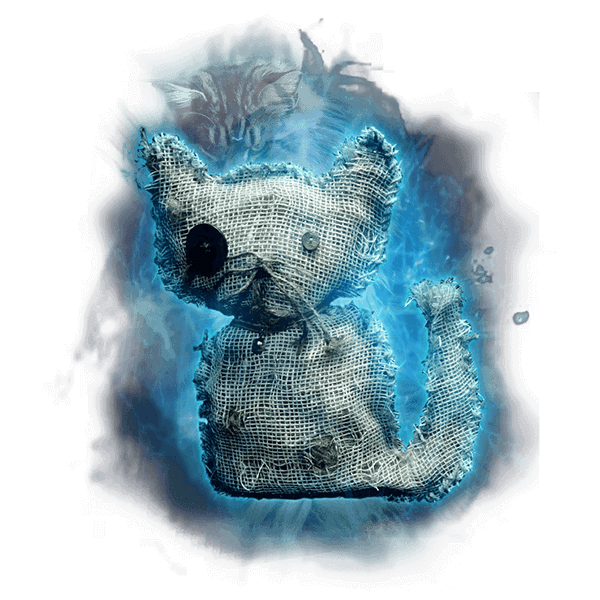 Rose’s cat puppet. After opening the portal to Midworld something happened.

Blinky is dead and alive. Something, someone rules this toy. That strange force protects Rose. 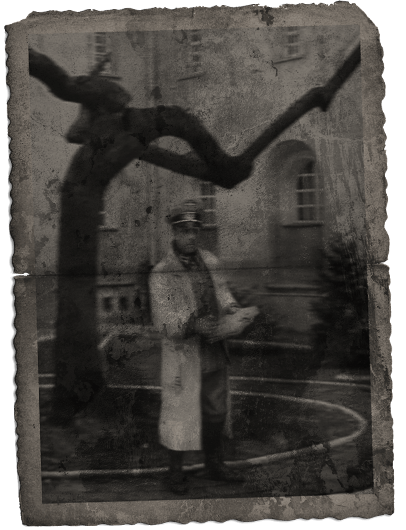 This cruel and ruthless Nazi has a contact with dark energy from beyond the Portal. 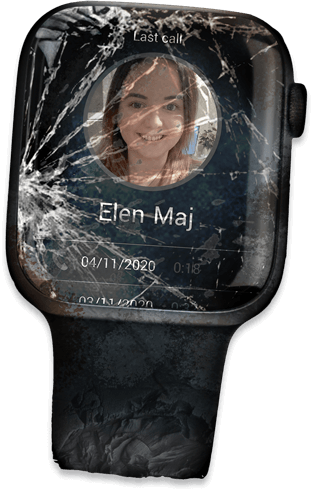 Elen is a teacher in Owińska. She, her boyfriend Mark and

Thomas belong to a group of archeologists who found a connection between Mary and Sarah. 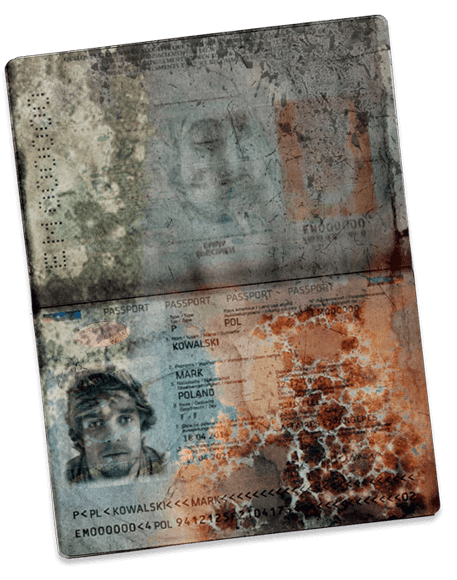 Mark works in Owińska library. In the convent archives, he found a photo of 1938 Owińska patients

with Sarah and a mysterious child. Mary owns exactly the same photo but without the child... 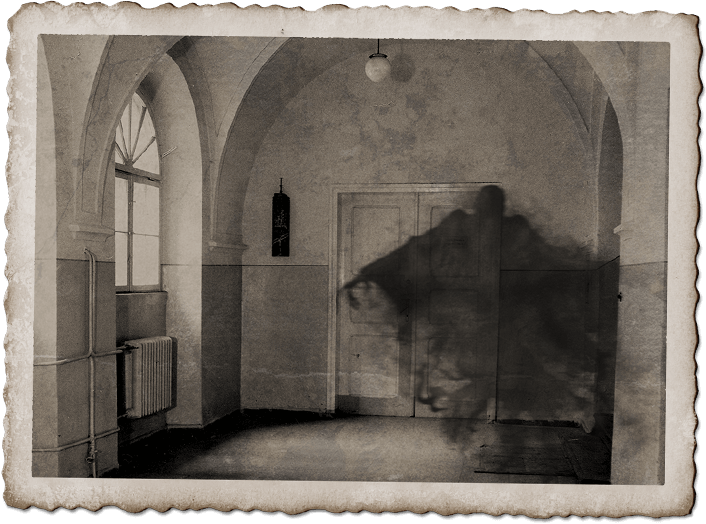 Dark energy that flows freely between all obstacles in its path. In the Creeper's presence you will feel unexplained, sudden anxiety. This dark power feeds on human weaknesses and anxiety. Rarely attacks first unless the unlucky intruder intersects the Creeper's trail. 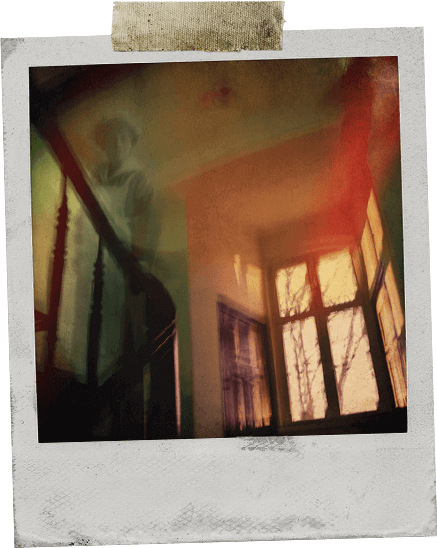 Spirits of former residents or medical staff. Sometimes good, sometimes evil, usually neutral. They resemble their former bodily forms. However, they are half transparent and emanate with cold light. Most often they repeat a scene of old life for eons of night. If someone disrupts the spectacle of painful secrets the ghosts get angry. 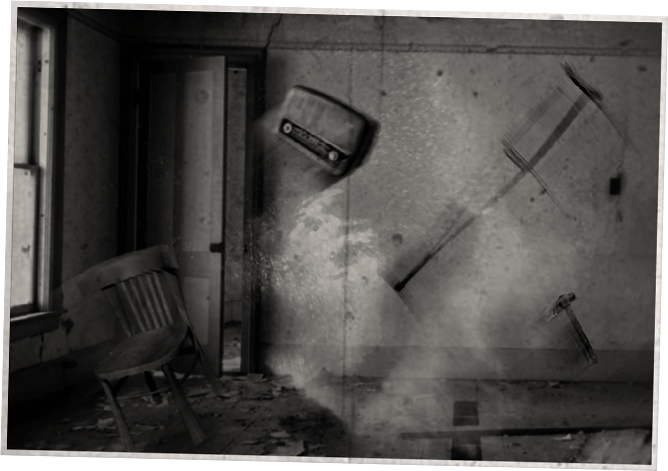 It's a literally noisy spirit. No one who came across him saw him, but everyone heard him. He haunts the rooms, more precisely the objects, furniture and paintings inside. Poltergeists' attacks are easy to recognize because everything from a large wardrobe to a teaspoon of sugar begins to move and makes terrifying, sometimes unnatural sounds. To calm the noisy spirit you need to quickly leave the haunted room. The Poltergeist does not chase the victim, but its emanation full of cacophonic sounds lures dangerous creatures.

Dice of Fate affecting the game

Movement of the character

This movie is a visualisation of Rosemary’s Fate gameplay.
Its purpose is to help you control the player in an audio game.

When you hear this sound you need to think and act.

You can find here visualisations of locations. They may be helpful if you’re stuck in a game.

But beware: pictures were not taken from entry points.

It all started with a dream…

As “Game the Same” we’d like to build innovative & thrilling audio games to prove that our findings are not only a mere addition to AV games industry, but it’s an industry on its own – not really explored yet.

Paweł “Al” Dagiel is the Godfather of Dynamic Audio Games. From the apartment on the highest floor he patiently designs Rosemary’s Fate Project and connects the dots.

Dominik Dagiel: the explorer and systems architect. 29th of January 2016 when he ran 60 miles during Orkanen Tor, he had a direct insight into the Midworld. Revealing the truth to humankind became his magnum opus.

Patryk Jatczak cannot sleep because he’s writing a code. The scariest parts of Rosemary’s Fate Audio Game were programmed in the state of insomnia.

Krzysztof Kus: the silent. Sound effects in Rosemary’s Fate speak on behalf of him. An unconscious part of Krzysiek’s mind is directly connected with the Portal. It allows him to copy sounds of the beasts directly from his head.

Michał Ratkowski was a party guy. The happiest man on a stage, playing piano till the morning. Until he glimpsed the heart of darkness in basements of the abandoned Owińska mental hospital. That experience interfered with his soul and made him compose Lacrimosa.

Jan Wegner was not looking for a job in Rosemary’s Fate Project. The Project found him. He had a dream. Strange mysterious force asked him to create a form of its emanation in our dimension. Jan stared in the eyes of Blinky. 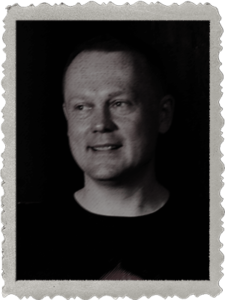 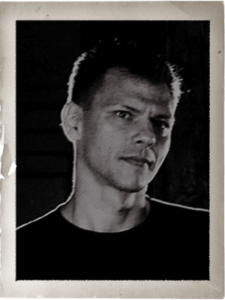 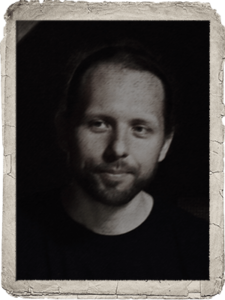 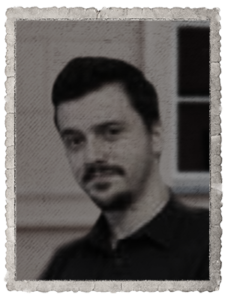 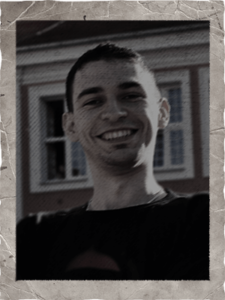 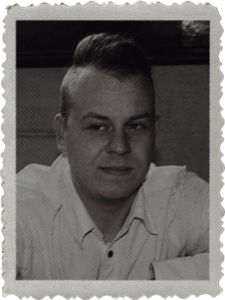 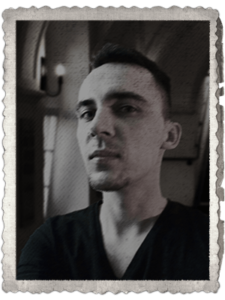 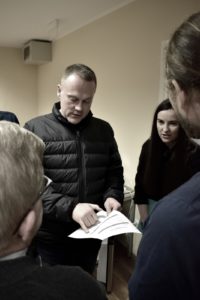 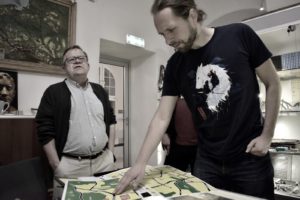 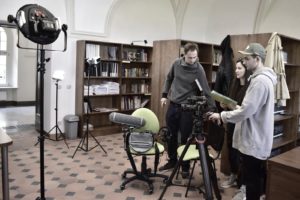 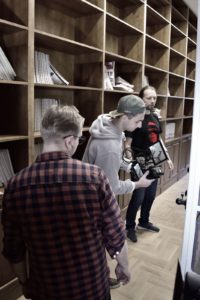 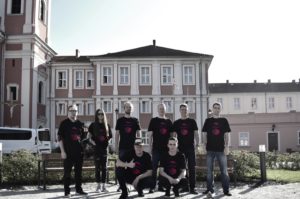 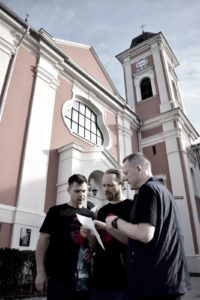 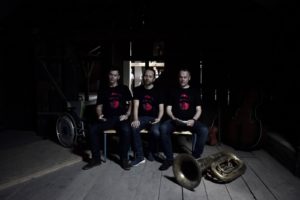 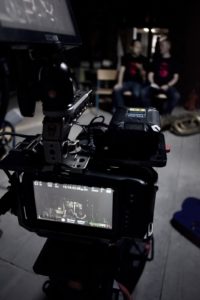 Stay up-to-date and give us your precious feedback about the most dynamic audio game in the world.

By continuing to browse the site you are agreeing to our use of cookies.